Butterscotch had a bad bite wound on his nose and lots of wounds on his back and sides. Dr. Griffiths neutered him, shaved the wound areas, and sent him to foster care with instructions to keep the wounds clean (warm compresses were used), apply ointment, and oral antibiotics. He is recovered, but his fur is still growing back in.

Butterscotch is very active, loves to dig, bunstruct, pounces on fresh greens, digs in hay, he is full of energy! Like most rabbits Butterscotch doesn’t like to be picked up but instead likes all fours on the floor. He does like to sit beside you to be pet.

Butterscotch was abandoned outdoors. He is initially nervous around people until he decides he can trust you. We believe he was abandoned with Snicker since they were found in the same area. 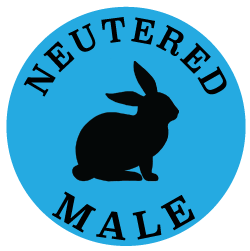