A “house rabbit,” allowed freedom of the home and yard, enjoys a lifestyle that is sociable, stimulating, and comfortable. However, the safety of such a lifestyle depends on control of the rabbit’s environment, to eliminate or reduce the hazards found there.

What kinds of outdoor hazards do I need to worry about? 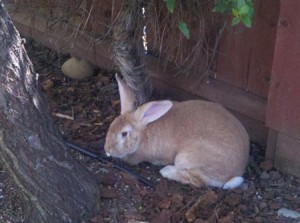 The most immediate hazard to an outdoor rabbit is attack by predators.

While the House Rabbit Society does not keep statistics on predator attacks, we do offer a warning based on the stories relayed to us by urban and rural rabbit caretakers across the country. A backyard hutch does not protect a rabbit from predators. Incidents include attacks by dogs, feral cats, raccoons, and coyotes; and more rarely, owls, hawks, opossums, and weasels. Determined predators can bend or break wire; agile ones can open cage doors. The mere presence of predators may trigger an extreme reaction in a rabbit; a panic attack during which the rabbit runs wildly back and forth, twists, and thrashes. A rabbit in this state can break her own back, or die from a heart attack. A survivor may be permanently disabled, or develop infection from bite or claw wounds.

Because most predators hunt at night, HRS recommends that an outdoor companion rabbit be brought indoors each evening. A sturdy, covered pen within the yard is usually enough to discourage day-time attacks, especially if humans are nearby.

A rabbit, even one who is spayed or neutered, if allowed the freedom of a yard, will demonstrate the instinct of the European wild rabbit, Oryctolagus cuniculus, to dig burrows. Over a period of time these burrows may become elaborate enough to prevent the rabbit from being captured by her caretaker. This is a problem if the rabbit is frightened, injured, ill, pregnant, or otherwise in need of human help. In addition, backyard dirt may contain harmful bacteria.

Therefore, we recommend that the rabbit satisfy her urge to burrow in a pen or box filled with clean, replaceable straw. Burrowing in the earth may be discouraged by adding a wire bottom to the rabbit’s pen, or by filling in burrows as they are started.

Having removed the rabbit’s “natural”–but hazardous–burrow, protection must be provided from extreme weather. A rabbit whose flexible lifestyle allows her to join her human family indoors can share their comfortable environment. A rabbit who must temporarily endure heat may be cooled by hanging wet towels over the side of the enclosure, or by placing ice frozen in cardboard milk cartons inside.

Many people believe that a bunny browsing in the yard will instinctively avoid poisonous plants. Having watched a rabbit munch on an oleander leaf, I can attest this is not so! We advise making a list of all plants growing in the yard, and checking the list for poisonous plants. Until all poisonous plants are removed from the yard, the rabbit should be confined indoors, or to a pen within the yard. Another poison risk is that of potentially deadly fertilizers and pesticides used on the lawn or yard.

The outdoors presents another risk, especially for physically compromised rabbits. Any rabbit unable to completely clean her fur of urine or feces is vulnerable to fly strike, a life-threatening condition. Prevention entails once or twice a day examination of high risk rabbits, and regular cleaning and drying of wet or soiled fur.

Other insects threaten an outdoor rabbit. Fleas, if allowed to infest the backyard, may subject a rabbit to flea anemia. In some areas, myxomatosis, a deadly virus, may be transmitted to domestic rabbits by biting insects.

Finally, an insidious danger to an outdoor-only rabbit is inattention from his caretaker. Even though the rabbit is fed, watered, and sheltered, infrequent observation and handling may cause health problems to go unnoticed until too late.

In summary, hazards to an outdoor rabbit are minimized by a routine that allows the rabbit to come indoors when necessary (at night, during extreme weather, or when ill); and, by the socialization and close observation which accompany such a routine.

What kinds of indoor hazards do I need to worry about?

The more an indoor, litterbox-trained rabbit is allowed to mingle with his human family and other pets, the more he will express his personality and be enjoyed for it.

Nevertheless, the House Rabbit Society recommends that an indoor cage or pen be prepared for the rabbit before bringing him home. This is for the rabbit’s protection, while his caretaker assesses and reduces the hazards of her home.

Cardiogenic shock from chewing electric cords is the most immediate danger to a free-roaming rabbit. Rabbits have an instinct to quickly and casually sever any cord or string. Especially tempting are cords that run across the rabbit’s path, or through a burrow-like area, such as under the couch. “Bunny-proofing” means encasing electric cords in heavy-duty plastic, or blocking cords and outlets with furniture so the rabbit cannot reach them. It is the single most important step in preparing an indoor area f or a rabbit.

While supervising a rabbit is not sufficient to prevent a quick bite through an electric cord, it is useful to observe and if necessary curtail the activities of a new rabbit. Rabbits under one year of age are daredevils, jumping up, over, under, and inside of furniture. “How high can a rabbit jump?” depends on the determination and athletic ability of the individual. A fall or entrapment, panic, thrashing and injury may result from the rabbit’s misjudgment.

Generally, mature rabbits are less adventurous and, after a period of observation, may be given unsupervised freedom in a bunny-proofed home.

A rabbit’s tendency to chew is often more inconvenient than hazardous, but house plants should be identified and poisonous ones removed. Synthetic materials, carpet in particular, if ingested in large quantities have the potential to block the rabbit’s digestive system. This can be prevented by providing natural alternatives for chewing (hay, wood, cardboard, untreated straw mats); confining the rabbit to an uncarpeted area; and spaying or neutering the rabbit to lessen the urge to modify territory.

Ironically, a rabbit so mischievous she must be caged for her protection, faces another danger. Confinement may lead to boredom, overeating, lack of exercise, and digestive problems. Possible countermeasures include: a double-decker cage which allows hopping or climbing; hay f or chewing; a cage-mate; plenty of toys; and as much supervised time outside the cage as possible.

A house rabbit of ten finds his cage a safe haven, returning there to eat or rest. However, a wire cage can also be a hazard if the rabbit catches his toenails, paws, or teeth in the wire. If a litterbox is offered within the cage, the cage may be constructed with a solid floor. Cardboard may also be used to cover a wire floor. In the case of a nervous rabbit, cardboard may be used to cover cage sides as well. For psychological security, a cardboard nestbox may be added to the cage.

Because companion rabbits behave boldly at times, caretakers may need to be reminded that rabbits are physically fragile. Fracture of the spine can occur if the rabbit struggles while inadequately supported or if abruptly released. Safe handling methods may not be intuitive, and practice is required. The adult caretaker must also protect the rabbit from handling by small children, and from roughhousing with other pets. If a house cat is a companion, kitty’s claws should be trimmed. A dog should be trained and supervised before interaction with the rabbit is allowed. Two strange rabbits must be introduced slowly and carefully in order to avoid fighting.

A house rabbit may enjoy walking on a harness and leash. However, even the most confident bunny may panic if suddenly aware of open space, the constraint of the harness, and the approach of an unknown animal. It is best to stay within familiar areas when walking a rabbit.

Advice about hazards to companion rabbits may be met with skepticism from rabbit caretakers. “Flopsy ate through the TV cord and she’s fine.” “Harvey chases cats out of the yard.” We don’t deny that rabbits are resilient, resourceful animals. But when longevity of our companions is a priority, we cannot afford to be complacent about safety. Our response: “If you value your rabbit, and want him to grow old, eliminate the hazards within his environment.”