Have A Heart – Don’t Abandon Your Rabbit Outside – BTW It’s Illegal!

What should you do when you can no longer keep your pet rabbit?

We are receiving an alarming number of emails, calls, and messages on social media about domestic rabbits being abandoned outside. The pandemic has brought with it folks who have lost their jobs and are struggling financially. Many cannot afford to keep their pet rabbit. Perhaps the rabbit is sick or injured and you can’t afford Veterinary care. There are resources available to help. Click Here to read about financial resources available to help you with your sick or injured rabbit. Some fear taking their rabbit to a shelter because they can’t afford the owner surrender fee, or they fear that their pet rabbit will be euthanized. The truth is a domestic rabbit has more of a chance of being rescued by a rabbit rescue organization or adopted then being euthanized at a local area shelter. The main shelter Friends of Unwanted Rabbits rescues rabbits from rarely every euthanizes a rabbit. While it is a possibility that your rabbit could be euthanized there is a greater risk of your rabbit succumbing to a horrific painful death if abandoned outside. Rabbits abandoned outside risk starvation because they lack skills to forage for food and have different food requirements than a wild rabbit. They can die from the heat or the cold, getting hit and killed by a car, or killed by a predator (dog, cat, raccoon, owl, hawk, snake, mountain lion, coyote, bobcat to name a few).

Domestic pet rabbits should NEVER be abandoned outside. They lack the instincts to survive outside like a wild Jackrabbit or Cottontail. Domestic rabbits are dependent on humans to feed and care for them. How can you tell if a rabbit is domestic or wild; Read Here to learn how. Many folks will see an area where other domestic rabbits have been dumped and think that their rabbit will be safe, but this is a false reality. In additions to the risks listed above, many owners of predators know of these locations and will pick up an abandoned rabbit to feed to their snake or reptile.  Abandoning a rabbit outside is not only guaranteeing their death it is illegal.  CA Penal Code 597s – Willful Abandonment of Animal • Every person who willfully abandons an animal is guilty of a misdemeanor…

As a rabbit rescue organization many will contact us to ask us to take in their rabbit or to rescue a rabbit(s) that has been abandoned outside. At times we can help, but often we do not have the space or the resources to take in a rabbit(s). We do our absolute best to recruit fosters and raise funds so that we can help the community, but the sad reality is that we are not a shelter. Many of the rabbits that have been rescued outdoors have been injured or suffering from illness. We do not have a shelter facility to take in many rabbits. The only way that we can help is through the kindness of volunteers willing to open their heart and their home to foster and the generosity of the public to donate funds so that we can afford the medical, spay/neuter, vaccination, and supply expenses to take in unwanted rabbits. If you are interested in becoming a foster for us, please send us an email to friendsofunwantedrabbits@gmail.com. If you’d like to help financially you can Donate Here

What should you do if you can no longer keep your rabbit? Your options are simple, reconsider keeping your rabbit or take him/her to a local area Animal Shelter. Please have a heart, don’t abandon your domestic pet rabbit outside. 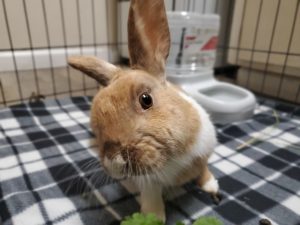 Mistletoe was abandoned outside sick with Encephalitozoon Cuniculi 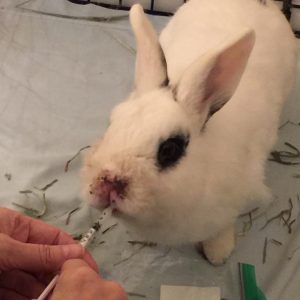 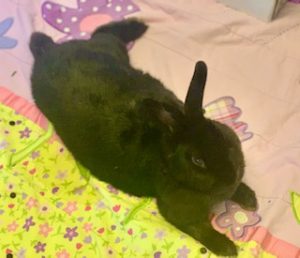 Faith was abandoned outside in an area with other rabbit. She has an upper respiratory infection, a large abscess on her back and was pregnant. 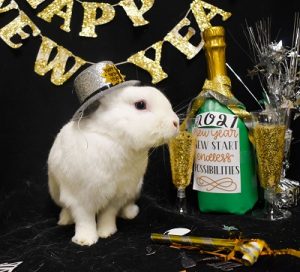 Tyler was abandoned outside with another rabbit in a feral cat colony. 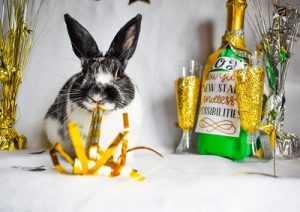 Raffi was abandoned on the side of the road with another rabbit. He was hit by a car that broke his back leg and pelvis. He was found at 1:30 in the morning laying next to his rabbit friend that was dead. 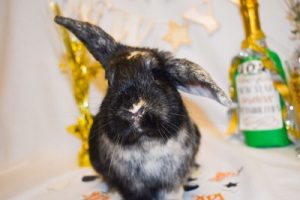 Viggo was abandoned in a park close to a busy road with his his five siblings. They were so terrified three of them ran into the street and were hit and killed by cars. Viggo and two of his sisters were fortunate enough to be rescued and saved.