Why does my bunny act aggressively

Rabbits are prey animals and can become easily frightened when approached. They can act defensively out of fear by lunging, grunting, boxing, and sometimes even biting. Rabbits are not born aggressive. It’s important to know how to approach a rabbit.

If you have a rabbit that is displaying these behaviors, first make sure that the rabbit is spay/neutered. Hormonal behaviors can cause defensive behavior. Female rabbits can go through a false pregnancy if not spayed and can act territorial and aggressive in an attempt to protect her “babies”. If the rabbit is altered, observe what triggers are causing the rabbit to feel fear and a need to defend themselves. Some triggers are picking up and holding a rabbit. Rabbits instinctively think a predator has picked them up and they will became scared. They can scramble in your arms, bite, grunt all to communicate to you that they are afraid and want to be put down. Rabbits like all fours on the floor. One must NEVER enforce their will on a rabbit and hold a rabbit because they want to hold them. It’s important to understand that rabbits as prey animals and instinctively think a predator has picked them up.  There are always exceptions when it comes to rabbits that like to be held. Some rabbits allow you to hold them and pet for short periods of time, but most rabbits prefer to sit next to you while you pet them. Standing and leaning over their space or in their space/cage/exercise pen can scare a rabbit. To a rabbit we are huge, looming over them can cause them to become scared. A rabbits blind spot is straight in front of their face. If your hands are in front of their face they can’t see you. A rabbit can became frightened and act out aggressively or think you have food in your hands and bite.

When we rescue rabbits we don’t always know their background story and what they may have been through. Some rabbits we know whats happened to them, but most are listed as strays at shelters so we don’t have any information about them. If a rabbit is displaying aggressive or defensive behavior it could be because they were mishandled in a prior home. Children may have been picking up the rabbit or the rabbit might have been abused. We work with these rabbits to gain their trust and teach them that humans are safe. We sit with the rabbits we’ve rescued and we don’t even reach out to pet them. We allow them to explore us and approach us once they feel safe. It takes patience, love, and a good understanding about rabbit behavior to gain the trust of a rabbit.

If you have questions about your rabbits behavior we are happy to have one of our rabbit savvy volunteers talk to you. Contact us at 916-710-0105 or send an email to friendsofunwantedrabbits@gmail.com. 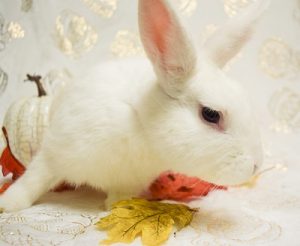