Rabbits Are Not For Easter

This Easter, don’t buy or adopt a bunny on impulse. After the novelty has worn off, reality sets in. The cost of owning a bunny cost more than owning a dog or cat. They look cute and cuddly, but the reality is bunnies are prey animals, they don’t like to be picked up and cuddled. They instinctively think a predator has picked them up. Bunnies poop 300 times a day. They can be destructive, chewing on furniture baseboards and digging up carpet. Bunnies have to live indoors because of the many dangers outdoors, from weather over 80 degrees that they can’t survive in to dangers of predators to contacting diseases like myxomatosis and fly strike. Bunnies live on average 10 to 12 years. They require a long term commitment. When your child loses interest, goes off to college, gets married, what happens to the bunny? When the adult moves, gets married, has a baby or gets divorced, what happens to the bunny? After Easter, when a bunny becomes sexually mature (8 weeks for males, 16 weeks for females) they display more destructive behavior. The average cost to spay/neuter a rabbit is $250.00 to $400.00. A few months after Easter bunnies are dumped at local shelters or worse outdoors where they lack the survival skills of wild rabbits and ultimately succumb to an untimely death. Bunnies are the third most discarded animal at shelters and the first to be euthanized due to lack of space designated for them at shelters. Rabbit rescues quickly run out of room and financially resources to rescue the influx of abandoned bunnies after Easter. This Easter do the right thing buy a stuffed toy bunny or chocolate. You’ll be saving a rabbits life.
Thank you to 101.5 @khitsradio for sharing our post and message not to buy a bunny at Easter

You can read the article Here 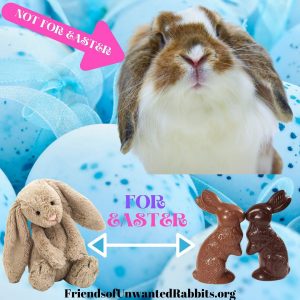 Kimberly
Permalink
Uncategorized
bunnies not for easter, Dont buy a rabbit for Easter, make mine chocolate, rabbits not for easter
No comments
41
0
0